From Warrior to Undergraduate: Nathan Durazo Finds His Place at CU Boulder 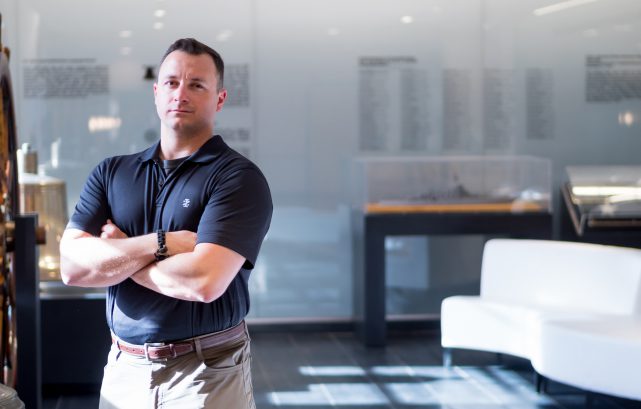 When Nathan Durazo enters a room, it’s hard not to notice the 26-year old’s composure. He stands like an oak, with a strong build and stance. His sharp eyes and attentive presence are captivating if a little unsettling; it feels like he can see straight through you. Thankfully, he also likes to talk and invites candid conversation.

Despite Nathan’s equanimity, he admits to experiencing moments of deep self-doubt, especially when he came to CU Boulder as an undergraduate student last fall.

He is the tenth generation in his family to serve in the United States military, but his decision to enlist was not entirely due to his family’s military legacy; Nathan also questioned the value of education.

“I didn’t see education as a priority in high school, so I wasn’t good at it,” Nathan said. “No one told me how it would be useful, so I had no discipline toward it.”

Nathan graduated with less-than-stellar grades in 2009 and immediately joined the Marines.

“I was dodging education by enlisting, but it worked out terribly,” said Nathan with a smile. “The Marine Corps made me do math.”

During five years of active service, he deployed to several countries and developed a host of skills and knowledge that shaped his character and worldview.

“The Marines drove home the message that education was important,” said Nathan. “It became my job to know geography, social studies, geometry, and foreign languages. There was no escaping it. If I had been better at subjects like math or science, if I had better skills on demand, I could have done cooler things in the Marines. A lack of education will hold you back in any field, and from the greatest part of that field.”

Nathan ended his active service in 2014, and considered transitioning directly to college, but was hesitant. He felt like he waited too long to go to school and imagined that campus would be unwelcoming. Those thoughts, and a lack of information about how and when to apply, put him off enrolling for another two years.

Nathan met with CU Boulder Admissions staff in summer 2017 and they agreed Nathan’s best option was to take classes as a nondegree student through Continuing Education for two semesters and apply for admission in summer 2018. This path would allow Nathan to build a current academic record for admission instead of relying on his high school credentials, which at 26, did not accurately reflect Nathan’s abilities or experience.

Nathan met with CE academic advisor, Blazey Heier, to get started. She helped him enroll in 12 credits of philosophy and history classes—his desired major and minor—in fall 2017.

“Blazey was honest with me. She didn’t sugar coat what college would be,” said Nathan. “I asked her how I could crush it at CU Boulder and be successful.”

In spite of an impressive resume of military and professional experience, and an outward appearance of strength and ambition, Nathan still doubted his ability to succeed in school.

“I had anxiety attacks for the first two days of class,” Nathan admitted. “I was afraid I was going to be so far behind and the faculty and students would know it. I thought it was impossible to catch up.”

Nathan was surprised to discover the coursework was manageable and he was more motivated to learn than many of his classmates. The realization was transformational.

“I went from thinking I was under-qualified and unprepared, to knowing that if I just apply myself, I can do whatever I want,” said Nathan. “I never worked with wine and I never worked with carpet, but both things I’ve done. My goal in going to college is to learn how to learn and not box myself in again with false narratives.”

Nathan hopes his story will inspire others who are interested in college but question their fitness or discount their academic abilities.

“Too many people stop themselves from reaching their goals because they are afraid to ask questions. I know because I stopped myself. I feared embarrassment of not knowing even the simplest concepts of college. I hope I can help someone else realize the internal barriers they create aren’t true. That would be the coolest moment for me.”

Connect with a CE academic advisor to learn how we can help you reach your goals.

My Courses Delete All

We are located at the corner of University Avenue and 15th Street in a white brick building.