Harold Hausman had a successful career working for a 3D computer graphics tech start-up when he came to Continuing Education six years ago interested in mathematics coursework at the University of Colorado Boulder. 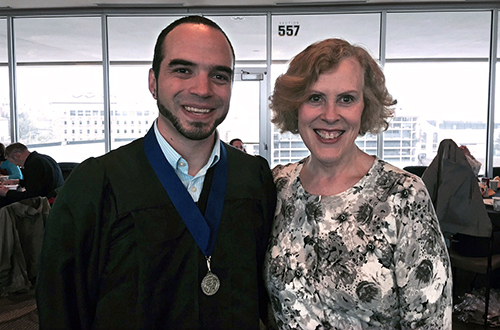 “I wanted a rigorous foundation to the mathematics I was already using every day in industry,” said the 34-year-old Boulder local. “My colleagues were all college educated, and working with them made the benefits of post-secondary education clear.”

With the help of Continuing Education Advisor Kathryn Tisdale, Hausman enrolled in mathematics courses first as a non-degree student through Continuing Education’s ACCESS program. Soon after he was admitted to CU-Boulder, and in Tisdale’s words, he “has been crushing it ever since.” At the spring 2015 commencement, Hausman received the Chancellor’s Recognition Award for earning straight A’s.

“My CU story literally began with Kathyrn Tisdale, and I consider myself extremely lucky to have found her,” he said. “With her help, and the support of Continuing Education, I was able to attend CU when it was unlikely that I would be admitted any other way. My academic accomplishments are rooted in the initial assistance I received from Kathryn and I am super grateful.”

My Courses Delete All

We are located at the corner of University Avenue and 15th Street in a white brick building.